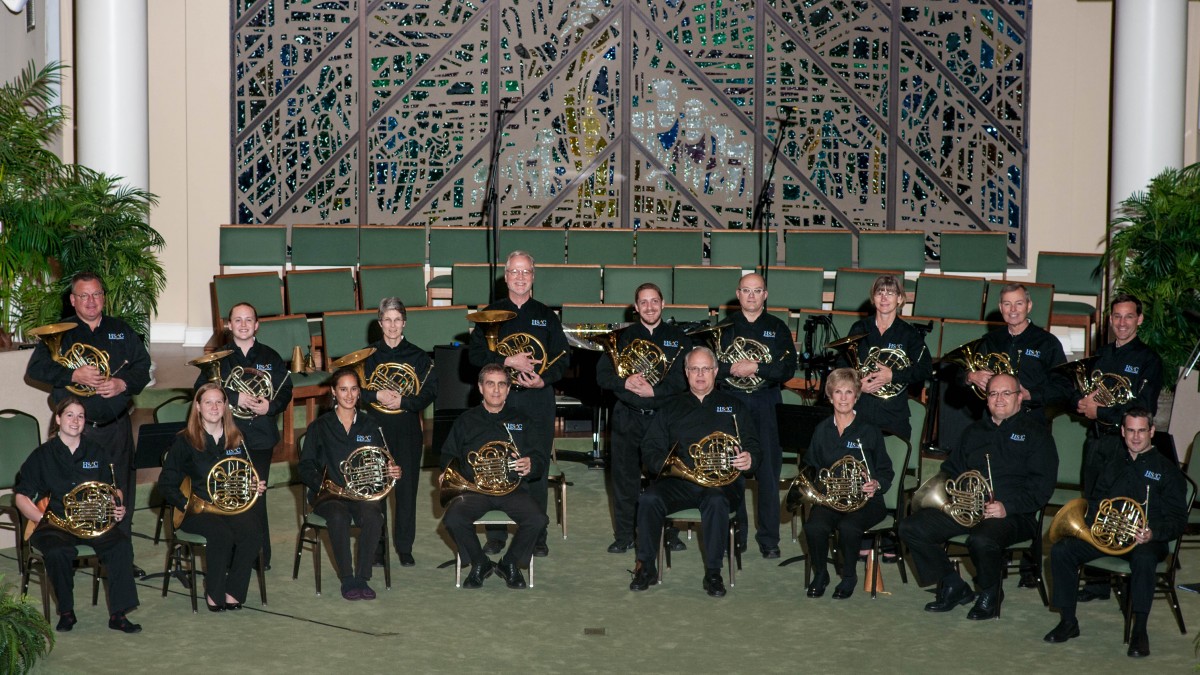 They know how to blow their own horn…The French horn, that is 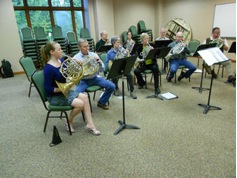 Some Horn Society of the Carolinas members rehearse April 13 at Church at Charlotte for their upcoming concert. 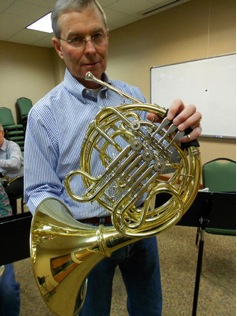 David Ballenger, one of the group's cofounders, shows off his French horn.

The Horn Society of the Carolinas.

Horn Society of the Carolinas’ first Charlotte-area program open to the public will be 7:30 p.m. May 12 at Church at Charlotte, 2500 Carmel Road. Admission is free; donations are encouraged. See www.hornsocietyofthecarolinas.org for details.

An ensemble that’s devoted to a beautiful and challenging instrument will soon be in full, unified voice in Charlotte for the first time.

Horn Society of the Carolinas’ May 12 performance at Church at Charlotte will showcase the French horn’s emotional power and versatility, which have inspired the 21-member group organized in February 2009. Made up mostly of south Charlotte residents, it’s said to be the only such club in the Carolinas.

The French horn “has the most amazing sound of any instrument in the orchestra,” says Judith White, 70, one of the group’s three cofounders. “I’ve been doing this all my life and I sit there sometimes with tears rolling down my cheeks thinking, ‘This is the most beautiful sound.’ … Just the shape of the instrument itself and the way it looks is beautiful. To see several horn players standing together holding these big, beautiful instruments is pretty amazing.”

White, who lives in the Arboretum area, and other members routinely speak of their passion for the brass instrument and the camaraderie of the group, both obvious during a recent rehearsal. Members in casual clothes bantered playfully before experimenting with different selections, often switching seats to maximize each player’s individual skills and produce the optimum sound.

Such passion transcends some significant obstacles. The instrument’s size and stress on breathing make it “very physically demanding,” White said.

Many musicians say the French horn is the most difficult brass instrument to play, because hitting the perfect note is a confluence of many variables. Factors include the player’s lips, the ability to find the exact spot in the long tubes where the note can be found and an unusually acute feel for pitch and intonation.

“We as horn players are also the equivalent of X Games participants in the orchestra,” says Jonathan Ramsey, 54, one of the group’s cofounders and past president of the HSOC. “Just listen to any musical score for a Hollywood movie,” said Ramsey, who lives in the Quail Hollow area. “The horn passages are sometimes moving, heroic and exhilarating, but it is high-risk/high-reward. If you can pull it off in a live performance, great. If you miss it, the results can be disastrous. “We have all been there and done that, and it creates a sort of fraternity of players who have lived the highs and lows of performing on this instrument.”

Even at a rehearsal, the horn’s sounds can elicit goose bumps. It’s striking in its versatility, creating a mood that can be regal, somber or celebratory.

David Ballenger, 63, the group’s other cofounder, who also lives in the Quail Hollow neighborhood, says the instrument has “extraordinary range.”

That range extends to the backgrounds of group members. Six are professional musicians who perform or have performed in symphonies, orchestras and other ensembles locally and internationally; others are community musicians who have played in local groups for civic, church, educational and nonprofit organizations. Ages run the gamut, from college students to retirees. Occupations include a retired technology executive, doctor of internal medicine and retired air traffic controller (Bill Tyler, HSOC president). Hideki Morimoto, a nuclear engineer who transferred from London, found out about the group through its website.

Although being collaborative is an obvious requirement for any ensemble, Ramsey says this collection of interesting individuals is part of what makes it all work. “A lot of horn players, you want to be a little different,” he says. “The Mormon Tabernacle Choir – what a great, beautiful example of blending creative beauty. But they’re not individualists. By nature, they can’t be. “I think a lot of horn players are individualists, a little bit of a ham sometimes.”

White says the group’s skill level and personality could lead to a broader role. “This is just such a fun group,” she says. “We’re so passionate about what we do and with horn playing in general. We really would love to start doing more outreach, going into the schools and making other people as passionate as we are about our instruments.”

Reid Creager is a freelance writer. Have a story idea for Reid? Email him at rcreags@voyager.net.