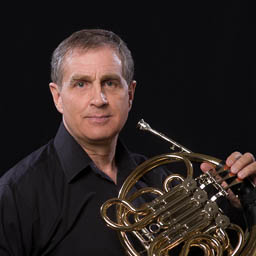 Bill Tyler, a native of western New York, earned a Bachelor of Music-Performance degree from the University of Memphis, and a Master of Music-Performance degree from the University of Wyoming. He was a concerto contest winner at both schools. Past performing experience include the Cheyenne Symphony and the Abilene (Texas) Philharmonic. His primary horn studies were with Richard Dolph (Memphis) and William Stacy (Wyoming), both excellent teachers who did their best, knowing that the odds were stacked against them. He has also participated in workshops with Michael Thompson, Richard Watkins, Charles Snead and David Ohanian, although Michael and Richard (and probably the others, too) would rather you not remind them of it.

Bill can be found bothering performing with the Fayetteville Symphony, the Greenville Symphony, the Somerset Winds (a woodwind quintet, with his wife Kim on oboe), the Out of Bounds Ensemble (a contemporary music group at Winthrop and CPCC), the Horn Society of the Carolinas, the Morristowne Brass, and just about any group that he has time for AND is willing to put up with him.