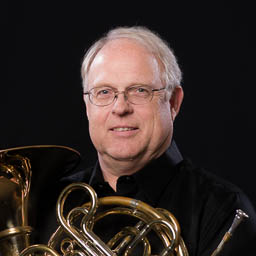 A native Charlottean, James Brown began playing horn at age 11 in a local summer band camp. By the 9th grade, his band teacher selected a few members to try a solo competition where he received a Superior rating and performed his solo on public television.  James played in several “All City” and “All State” bands through high school, and attended Pfieffer College Music Camp and Cannon Music Camp during the summers. He also played at area churches, particularly Park Road Moravian Church (now Peace Moravian Church).

At Appalachian State University, although a business major, he played in the Marching Band, Symphonic Band, Brass Choir, Orchestra, and Wind Ensemble. James was also a member of the Wilkesboro Orchestra while at college.

Since receiving his BSBA in Insurance & Real Estate at APP State he has played in many area community bands and orchestras while building his insurance agency.  James continues to play in church and community bands playing trumpet, euphonium, and his favorite – the horn. He plays an Atkinson.