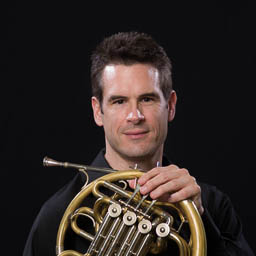 Dr. Christopher Griffin began the study of music at the age of seven. Fortunate to have the continued influence and enthusiasm from both parents, it has been possible for him to build a career and wonderful life as a musician. Currently he works as a private horn instructor and freelance musician in the Charlotte area, most recently joining the faculty of UNC Charlotte. Additionally he teaches horn, sight singing and ear training at Wingate University, Wingate North Carolina. He maintains a private horn studio, coaches chamber music at several local schools and was on faculty at the Interlochen Center for the Arts Summer Arts Camp from 2004-2007.

As an active performer in solo, orchestral and chamber music, Christopher recently completed the second of three recitals exploring the works for horn and organ in collaboration with Judy Tolbert, organist and choir director of St. Paul’s Episcopal Church, Fort Mill, South Carolina. As an orchestral player he is a member of the Western Piedmont Symphony and the Ballantyne Chamber Orchestra. He also performs with the Charlotte, Charleston and Greenville Symphonies as a substitute musician. His interest in chamber music has been life long, helping to establish both the Border Wind Quintet and the Palmetto Horn Trio as one of the founding members of those ensembles.

Dr. Griffin considers his membership in various regional and international music societies an invaluable and enjoyable part of his musical life. As an active member of the International Horn Society he participates in workshops and symposia as both an enthusiast and contributing regional artist. He performed the premier of Richard Broadhead’s “In Remembrance: Antiphon for Three Horns” during the 28th Southeast Horn Workshop hosted at the University of Delaware.  Additionally he serves on the advisory board of the Horn Society of the Carolinas performing regularly with that group.

Dr. Griffin received his D.M.A. from the University of Southern California, a double M.M. degree in Music Theory and Horn Performance from Temple University and a B.M. in Horn Performance from Auburn University. His primary teachers include Richard Todd, James Decker, Randy Gardner, Dr. Randall Faust, Dr. Gayle Chesebro and Aaron Brask. Although he performed primarily on a Conn 8D for over 25 years, he is now very much at home on his Paxman 25L.