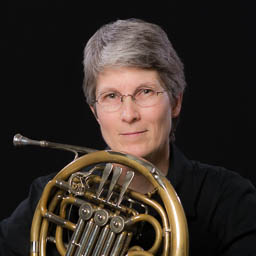 Jill (Behne) Wyse, originally from Mason City, Iowa, studied horn under Paul Anderson while pursuing her BMA degree at University of Iowa. She then went on to achieve her MMA degree at the University of Akron under William Hoyt and was an auxiliary horn player with the Akron Symphony Orchestra. After moving to the Charlotte NC area, she played 2nd horn with the Charlotte Philharmonic for four years before settling down to raise a family.

In addition to teaching private lessons on various brass instruments, she enjoys conducting a youth chamber orchestra (Tehillah Chamber Players) consisting mainly of home-schooled students in the Waxhaw NC area. Tehilla Chamber Players is now in their sixth season under Mrs. Wyse and has enjoyed consistent growth in both numbers and musicianship. Jill, along with her husband Terry, are founding members of the Horn Society and enjoys playing her (suspected) pre-WWII German Kruspe horn despite the fact that it does not possess a secure high Ab.